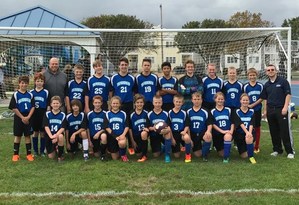 The 2016 Dennis Township Middle School soccer team placed second in the Atlantic Cape Junior High Athletic League this year with a 8-1-1 record.  They tied Ventnor for the championship, the same team that gave the Hawks their only loss of the season.

"We had an outstanding season with an amazing team effort by all of our players," explains Coach Covarrubias.  "We ended the season with a great record that everyone should be proud of and Coach Gurdgiel and I are very proud of our student athletes."